Outside of Japan, it is also known as Nanami Tōgarashi. Shichimi must be distinguished from Ichimi Togarashi, which simply means ground chili pepper.

This spicy recipe for the spice mix is ​​usually prepared with the following ingredients:

Preheat the oven to 140 ° C. Place the tangerine peel on a baking sheet. Heat the husks in the oven for 45 minutes to 1 hour until they are completely dry.

Process Nori in the mini food processor until fine flakes are formed. Stir the nori with the remaining spices until well blended.

Store in a tightly closed container in a cool, dry place until use.

Some recipes replace or complement the ingredients with yuzu, rapeseed, ginger or shiso peel.

Where to buy Shichimi Tōgarashi?

If you want to make this mixture of spices, but do not want to make it, you can always get it made in specialized stores.

This Japanese spice can be obtained in large stores such as El Corte Ingles, Mercadona, Carrefour or Walmart.

You can also buy Shichimi at cheap prices on portals like Amazon. Where you also have the advantage that they send the order directly to your home in 24 hours. So if you want to buy Japanese spices, it’s an excellent choice.

Get the best deals on Shichimi tōgarashi on Amazon 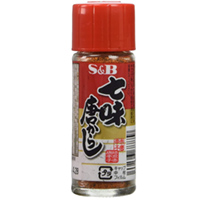 Use of the spice mix Shichimi tōgarashi

It is often used as a spice of miso soup with pork and Gyūdon. It is also used as a table spice to flavor noodles and roast meat

Some rice products such as rice cake, agemochi and roasted mustard also use it as a spice.

Originally, the mixture was made by herbalists in Edo and, therefore, it is sometimes referred to as the origin of Yagenbori (薬 研 堀). Today, some stores in temples such as Zenkoji in Nagano and Kiyomizudera in Kyoto are known in Japan.

The mixture of spices for your soups

Japanese seven-spice powder is a popular mixture of spices for soups, rice dishes and pasta dishes.

It has a good balance between fruity flavors and spicy flavors. Sprinkled over prepared soups or mixed with hot fried noodles, the full aroma of Japanese cuisine unfolds.

Have you tried it yet?